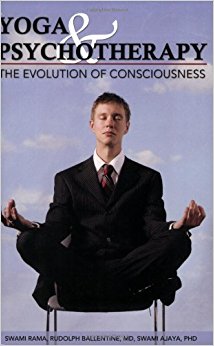 Is a yoga “student/practitioner” also a psychotherapy patient? In our experience, the answer is almost always “yes.” Yoga is psychotherapy. Yoga and Psychotherapy: The Evolution of Consciousness explains how the process of therapy works at all levels of the body, mind, and spirit. This excellent work makes numerous noteworthy points. Rudolph Ballantine, MD, and Swami Ajaya, PhD, bridge East and West as yogis and Western therapists. Their experience as therapists places an emphasis on psychotherapy more than the “general field of psychology.”

The book begins by tracing a brief outline of the evolution of yoga. The evolution of yoga is found in the five levels of functioning, also known as sheaths or koshas (refer to What is Meditation? and What is Yoga?). The five sheaths form a seamless continuum of the entire spectrum of human nature, and each sheath is a segment of the whole.

The basic nature of the first sheath, the physical body, is matter. The first chapter of the book explains the physical sheath and how yoga postures affect psychology. Asanas start creating an inner awareness. Biofeedback is described as a useful technique to teach people how to control what are normally considered involuntary internal parts of the body.

The vital life force, prana, which animates this physical matter, is the second sheath. Breathing patterns have a direct effect on body physiology as well as emotions triggered by thoughts. Through the practices of pranayama, matter is connected to thoughts and yoga psychology. The pranic energy is the key to integrating the consciousness as body and thoughts are connected by breath. Thoughts are the substance of the mind.

The third chapter and the third sheath is the mind. As stated in the Overview of the book, “It [the third chapter] contrasts the Western method of observing the mind by observing behavior with the yogic method of studying it through the direct experience of introspection using meditation techniques.”

The subsequent chapters go beyond the mind into altered states of consciousness and the unconscious mind. In particular, the authors discuss the psychologies of Jung and Freud in the exploration of the unconscious mind. The reader is introduced to the “non-verbal discriminative faculty” known as buddhi. Further development of this discriminative faculty leads to the yogic state of bliss.

The psychology of chakras is also explained briefly. There are seven common chakras that are referred to as different levels of consciousness and as points or vortices of concentrated energy. Each chakra manifests certain psychological behaviors. The behavior displayed by a person gives an indication of which chakra is dominant.

No specific yogic method is described in detail in terms of psychotherapy. The reader gets a general overview of various yogic ways and their therapeutic attributes. This is understandable as going into that level of detail would make the book unmanageable. Along the way, in the writing, the authors raise important questions and clarify the use of crucial terms from the yogic perspective.

What is the mind and how do people interpret the word or even the concept? What is I-ness, often called ego? The word “ego” is used in so many ways that unless the context and meaning are not clarified, there is inevitable confusion and misunderstanding. The same goes for intellect, consciousness, and any number of other words. Different cultures, philosophies, languages have varying concepts and meanings. Within the same language, there is often a colloquial use of a word that is different from a more defined philosophical or psychological use. So for clearer communication, clarity on the use of words is important and this book is particularly strong in this aspect.

Areas of overlap and divergence between yoga and Western therapy, as the authors see them, are clear in the passages here:

“In contrast to psychoanalysis which emphasizes the role of repression in forming the unconscious, yoga psychology sees the imprints left by the constant input of everyday sensory impressions as being equally important in building the unconscious mind… Psychoanalysis emphasizes repression because its interest is in how mental illness originates. Yoga psychology, however, is more interested in providing a way of understanding even the well-adapted mind so that development will not be limited to what is currently considered ‘normal.’

In yoga psychology, there is a level of consciousness beyond the ego level that comes eventually into being as awareness is progressively expanded by making more and more of the unconscious conscious. It comes into full flower when the unconscious is finally fully known.

But Jung, like Freud, had no idea that the full integration of the unconscious could be accomplished. He did not know that it was possible to bring the entire mind, including that which he called the ‘collective unconscious,’ into awareness.”

The authors bring a wealth of insight to the holistic fullness of yoga and how it encompasses the whole being in all states. This book is extremely well-thought, well-written, and comprehensive without being overwhelming. It puts yoga into a much-needed context as well as purposeful meaning. We begin to understand ourselves, our practices, and the people around us.

Most people who come to yoga seem to be working through physical as well as mental and emotional issues. A good yoga teacher is deeply observant, perceptive, and is not just helping in “physical therapy” but is “treating” the whole person through various breathing and meditation techniques as well. This book serves as an important resource.