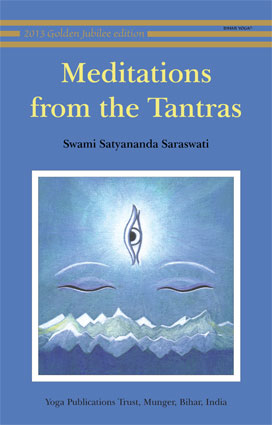 When people think of yoga, they think about asana (physical postures) and pranayama (breathing techniques). If meditation is directly associated with yoga, it might be a repetition of a mantra, or some short guided visualization, or deep relaxation. Serious meditation is associated with Buddhist practices, not “yoga.” This is a serious misconception.

Swami Satyananda was prolific in his teaching and writing. Comfortable with the East and West, he was equally at ease in Hindi, Sanskrit, and English. He had an excellent grasp of science as well as the tantric works. One could call him an intellectual and intellectually curious yoga guru.

If you have no access to a qualified teacher, the book is your teacher. Read and record the transcript. One word of caution: I get calls from yoga teachers with questions on these practices that have they have not been taught. They have never practiced them and they are clueless about them, but they happen to have discovered the book and decide to teach the material. Make sure your teacher knows these practices personally. Otherwise you are better off on your own with CDs available online or Youtube audio tracks.

There is a great deal of similarity with Buddhist meditations (particularly with Yoga Nidra, chidakasha dharana, and antar mouna) and you can see that in the book reviews of Breath by Breath and The Art of Living.

Meditations from the Tantras overlaps with several other Bihar School of Yoga (BSY) books. But if you don’t have those books, the book is self-contained with all the background theory and explanations.

Thirty years ago, yoga needed the endorsement of scientific and medical research for people to take it seriously. We have come a long way since then. People take yoga seriously and it is global. That does not mean that research is not necessary any more. In fact, far more valid research is needed in yoga, yoga therapy, and yoga meditation. The bulk of the research attention goes to Buddhist practices because of the deep links and bonds they have forged in medical and academic spheres of research.

However, BSY writers perhaps need to know that every statement does not need “science” to validate it (yoga philosophy can stand on its own)—don’t take my word for it, don’t take your word, it is what “science” says (like Simon says). Research claims are clearly helpful in therapeutic benefits. However, any claims that science or medical research says this or that must be supported by citations of papers published in reputable academic and scholarly journals if the BSY books want to portray themselves as scientific, evidence-based writings. Most research studies are poorly designed and not statistically valid. Most doctors openly question the validity of the bulk of these studies.

As a sign of growth and maturity, just like other philosophies, yoga has to be open to honest, civil, respectful and objectively critical discourses for continued positive growth. It cannot have just authoritarian, unquestioning dispersion, and passive acceptance of knowledge. For better or for worse, we learn by questioning in this contemporary age perhaps more than we learn by faith. Yes, it does open up space for exploitation, but that already exists and it exists in every field. It would be fair to add that some medical doctors and psychologists who have some knowledge of yoga and meditation, mistakenly lead people to believe they are expert yogis or meditators. Somehow the MD or PhD also becomes a qualifier for expertise in all aspects of yoga and meditation and is therefore fair game for cashing in on the hunger for meditation. The small sliver of yoga knowledge is used to openly and wrongly challenge, misinterpret, and misinform the true teachings as well as the true, authentic masters. For the most part, in my opinion, it is still a symbiotic relationship with each learning from the other. In time, this will merge. Jon Kabat-Zinn is a clear example of a complete fusion of medicine and Buddhist mindfulness-based meditation.

This is where Buddhism is more appealing as it is taught in the West–it does not ask meditators to take anything at face value or on faith. Experience it for yourself, take it through direct personal experience, and if it does not work for you, drop it. That is much more scientific without ever saying so. There is no high-handed authoritarianism, at least in the way the teachings are presented to the Western world. Therefore, much as yoga centers here in the United States value the enormous and generous practical information from the BSY, practically giving away transcripts for entire classes, they are uncomfortable with what they perceive to be a didactic tone.

The enormous chasm between yoga meditation and Buddhist meditation can be narrowed by greater engagement as equals with universities, hospitals, and research institutes. This has been so wonderfully demonstrated by institutes such as the Mind & Life Institute and the discourses the Dalai Lama regularly has with the science, medical, and research communities. They learn collectively from each other with mutual respect.