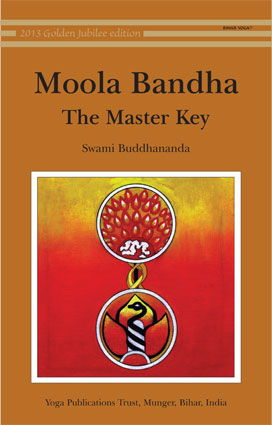 Chela Buddhananda, also known as Swami Buddhananda, was one of the key master teachers at the Bihar School of Yoga. In this clear, concise, and significant book first published in 1978, Moola Bandha: The Master Key, lies the root of kundalini yoga, a part of tantra. Kundalini yoga and tantra are greatly misunderstood and there is much confusion in most books regarding moola (mula) bandha. This book is a scientific and scholarly piece of work. There are step-by-step practices that accompany, support, and illustrate the theory.

Swami Buddhananda worked in Australia with psychiatric and physiologically disturbed patients for a number of years. Realizing the limitations of medication and traditional psychotherapy, his search to effectively integrate the mind and body led him to yoga and Swami Satyananda. He gained profound insight into the mechanics of the mind, depression, and neurosis as well as the yogic techniques to alleviate much of this suffering. The insight resulted in this book. This is the only book written on moola bandha.

There are three locks or bandhas: jalandhara (throat compression), uddiyana (abdominal contraction), and moola (perineal contraction). The author explains the concept of a lock and its mechanics. They operate at the physiological, pranic, mental, and spiritual levels. There is a clear explanation of all these levels:

“The Sanskrit word moola (also written mula) means ‘root, firmly fixed, source or cause, basis, the foot, lowest part or bottom, foundation’. Bandha means ‘lock, restrain, shut or close’. Together the word moola and bandha refer to the contraction of the mooladhara chakra, the seat of kundalini. This contraction is triggered at the ‘root’ of the spine or the trunk of the body, the perineum…”

“The importance of moola bandha should not be underestimated for its perfection leads to a spontaneous realignment of the physical, mental, and psychic bodies. The physical contraction of the perineum has the beneficial effects of: maintaining hormonal balance and stimulating and regulating the nerves that innervate the lower pelvic region, thereby regulating all the internal organs…”

“As a mental relaxant, moola bandha has been found extremely useful in the treatment of such mental disorders as depression, neurosis, some phobias, hysteria and mania…”

“The effects of moola bandha on the pranic level are more pronounced than those on the physical and mental levels. It has a subtle yet powerful effect on the psychic body, acting as a trigger for the awakening of mooladhara chakra and kundalini… This means that moola bandha prepares one for true spiritual awakening. An aspiring sadhaka should treat moola bandhas part and parcel of his main sadhana.”

Swami Buddhananda addresses this confusion. In the chapter Anatomical and Physiological Aspects he writes:

“Much confusion surrounds the correct way to perform moola bandha, which muscles are involved and where they are located. In translating the original Sanskrit texts many commentators, being unfamiliar with yogic practices or not fully conversant with the basic anatomical aspects of the pelvic floor, have unknowingly led people to believe that there are two ways to practice moola bandha when, in fact, there is only one…”

However, he points that there is a great difference in the effect of involuntary contraction and voluntary contraction. There are detailed diagrams and instructions to help the beginner as well as the advanced practitioners. As a teacher of this caliber is hard to find, this book is most helpful.